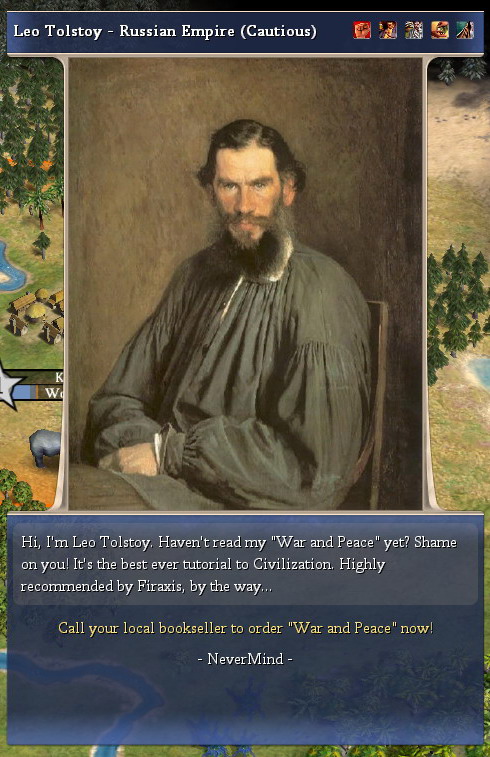 There is a lot of excitement about games and education but so much of that fervor misses a crucial point at the heart of Rob’s assignment. Games, like other media (books, articles, films, etc.) express arguments in their content. But it’s not just the content of the games that make arguments. In most cases the most compelling arguments in games are actually embedded inside game mechanics. As Rob’s students uncovered, the structure of the tech tree itself makes assumptions about how progress, science, and technology work.

Rob’s assignment is in fact so fun that there are all sorts of gamers that do exactly this sort of thing for fun. Civilization has a sizeable Moder community, which spends a tremendous amount of time building, tearing apart, and remaking the way science and technology work in the game. For an indication of the tenaicty of this community take a look at this book length post on editing tech trees in Civ 4. More impressive than the posts length are the 150 comments from modders thanking and critiquing the work. For another view on the community check out this Civ Asia scenario. Many of these moders are going well beyond tweaking the game, for example in this thread some are working on put different civilizations on completely indpendent  trunks.

The tech tree is such a facinating entity that it provokes all sorts of gamers to get into heated arguments about how the history of science and technology works. In the face of this sort of evidence it is hard to support notions that limitations in the way Civ models history give gamers a poor conception of the way history works. On the contrary the enthusism of these moders seems to suggest that the mechanics of Civ provoke gamers to think more deeply about the nature of science and technology.

I think historians and sociologists of science might be surprised to learn that video game designers spend a considerable amount of time and energy building playable models of the history of science and technology. In game design circles these systems are commonly referred to as “Technology Trees“. Below is an example of one of these trees from Civilization ll.

The tree provides a guide to the relationships between individual intellectual discoveries. Each box represents a single potential discovery, the other items inside that box are the benefits that technology provides.  The blue and red lines chart out lines for perquisite advances. For example, to discover writing a player needs to first discover an Alphabet. Once the player discovers writing they can start training diplomat units and building libraries in their cities. If they have also already developed a code of laws they can start to research literacy, which would allow them to build the great library world wonder.

Tech trees are a part of a variety of games. For example see Bob Bates book Game Design.

In game design tech trees provide a powerful way to create a wide range of player strategies. Scholars might find the sort of technological progressivism at the heart of this mechanic a bit discomforting, but that aside, its an interesting way to play with the history of science and technology. In many cases the trees are quite sophisticated. We can think about them in three parts; the input the system requires for advancement, how the different kinds of knowledge relate to each other, what those different pieces of knowledge contribute to game play. I will pick these apart for the earlier example from Civilization ll.

In Civilization players invest a portion of their Tax income into science and luxuries while holding onto the rest for spending on infrastructure or to weather future financial hard times. Players can also assign representative amounts of citizens in their cities to work as scientists. Both their scientists, and the funding allocated to science generate research points. The player then decides which advancement to study. Each turn the player racks up research points that are then contributed toward the advancement they’re exploring. When the player gets enough points they acquire the advancement and the benefits (new units, new buildings, new forms of government, and world wonders) it provides.

The system in Civilization is quite sophisticated, and there are other similarly sophisticated systems in different games. I think they are worth thinking about more for a few reasons. First, the chart I used in this post did not come from a game company. Civilization has a vibrant user community, one of whom created this document. Scholars working on the public understanding of science frequently bemoan how little the public understands about how science and science policy works. These games are compelling enough to get players working on mapping and thinking about this kind of knowledge. There is a chance for game designers, historians and sociologists could think about these sort of models together, I think each might get something out of it. Scholars could provide interesting ideas for modeling the history of science and technology, and designers might be able to provide gamers demands for more athuentic experiences in their games.